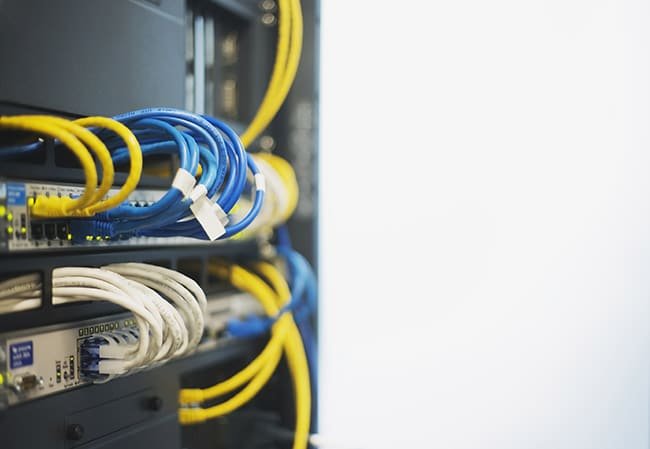 The internet has become a full-on necessity in the business world.  While it had been a convenience, or supplemental tool to the office workspace thirty years ago, times have since changed drastically.  The technological boom that started in the early to mid-90s with the invention of the internet has exploded and grown at an astronomical rate like never before.  It is moving so quickly that it is hard to keep up with the upgrades and improvements that seem to appear daily.  The more internet bandwidth that is required, the more important it is to have top-of-the-line equipment.

Business and home computers alike, can be attached to other computers and devices as a network to share resources, exchange files, or allow electronic communications.  These networks can be connected through cables, telephone lines, radio waves, satellites, and infrared beams.  Once the point is reached that these network connections are required, there is a big decision to make. . .   which connection method is best?

Setting up a network using ethernet cables is generally the best way to go about getting the most out of the network.  The primary use of an ethernet cable is to connect devices to the network.  These cables vary in speed and bandwidth capabilities.  Cat cables are a perfect example.  Cat simply stands for “Category.”  After “Cat,” there will be a number designation set by the manufacturer.  The higher the number, the higher the speed and frequencies in megahertz.

A Cat 5 Cable provides performance for High-Speed Ethernet or Gigabit Ethernet ranging up to 100MHz.  The Cat 5e cable is the most commonly used cable due to its low cost and faster speeds than a traditional Cat 5 cable.  The “e” stands for enhanced.

Cat 6 is the next generation of cable.  As with most improved products, the Cat 6 cable offers higher and faster bandwidth output.  One of the major downsides to the Cat 6 cable is that it is considerably more expensive than the Cat 5e due to its production costs which are raised because of QA standardization and braided shielding, which protects the cable to help prevent crosstalk and system noise.  Cat 6 cables are backward compatible and can be plugged into any Cat 5 port but will only be able to provide Cat 5 speeds.  Also, Cat 6 can support speeds of up to 10 Gigabytes per second (Gbps), the downside being that they only have a range of 55 meters.

When it comes to making the decision between Cat5 and Cat 6 cables, you need to first look at your network and what your needs are.  Cat 5 cables are cheaper but do not produce as high a bandwidth as a Cat 6 cable.  It does not have backward compatibility, like the Cat 6, either.  But just because one cable is faster than its counterpart, and is an “improved” version, that does not mean that it will be the right fit for your network. Cat 5 cables are much more suitable for home networks and Cat 6 are typically better for a business network.

So, it would be wise to first determine what your network needs are before choosing a cable.  The experts at Progressive Office specialize in designing networks and have advanced knowledge on the proper way to set up the network of your needs.  So, for more information, or to set up a consultation, please visit www.progressiveoffice.com

No comments to show.